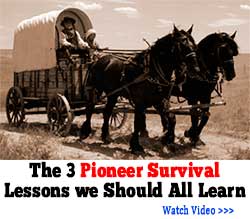 You can buy good used homestead tools at very low prices at auctions. Often you can find tools there that you can't find anywhere else.

• A 7.6-horsepower Gravely tractor with electric starter for $200;

• A perfect scythe, including snath and grass blade, for $8;

• An assortment of digging irons for 33;

Beyond simple economics, farm auction!, are a common form of entertainment and socializing. Going to auctions is a goad way to equip yourself, and a fine way to meet nice folks who share some of the same values you do.

A word of warning here—in fact, several words. I'm talking about farm auctions, not antique auctions. It is usually easy to tell the two apart, because auctions are advertised in the local papers and the ad should provide the clue.

For example, an ad appeared in our local daily recently that read like this:

And so on for some six inches of small, dark type describing an assortment of farm machinery including some nice horse-drawn equipment and a wide assortment of hand tools.

That is a farm auction. These ads frequently begin with a poignant phrase such as: "Due to quitting fanning, 1 will oiler the following at Public Sale located on the premises."

Second- or third-hand tractor attachments can often be picked up at reasonable prices at farm auctions.

Great "finds" cai be made at auctions, though some oil and clbuw grease may be needed to get parts moving again.

In these parts, the small family farm is a dying institution. Except for a few hardy souls and a sprinkling of crazy homesteaders like us, young folks leave the farm as soon as they can. Surveyor's stakes sprout in the fallow fields, soon to be followed by the early signs of suburban subdivisions. It's a familiar, tragic story. But it puts a lot of equipment on the market for the careful homesteader.

You want to stay away from antique auctions, though. Be wary of auctions that advertise a lot of old guns, coins, or glassware. Prices at those affairs run high and are frequently unpredictable. I've seen a corn shelier worth no more than $10 go for §25 because an antique lover wanted to make a lamp, or a toilet paper holder, or something like that, out of it. So be careful at these kinds of auctions.

Care, of course, is a necessity at all auctions. I'm going to give you six tried and true rules for auction buying which should guarantee getting your money's wirth at auctions. But before we get into that, there ar£ some preliminaries you ought to know if you are planning to frequent auctions.

First, almost anything can be, and is, sold at auction. In the case of fa>m auctions, that means everything including land, houses, livestock, canned and frozen goods, equipment, and clothes. Some time ago I went to an auction where a lovely 15-acre piece of mountain with a fine old stone house was sold. Included in the list of items for sale was a Home Comfort wood stove, a forge in good working order, a shell' full of canned cherries, and a complete World War I Army uniform, right down to the puttees.

If you decide you want to buy something at an auction, keep in mind that most require payment in cash on the day of the sale. This usually permits payment through a local check, but it is a good idea to call the auctioneer beforehand. His number is usually listed in the ad. In the case of big items, such as land, houses, and heavy equipment, the full-payment requirement is usually modified, in these cases, the auctioneer generally wants ten percent on the day of sale and the balance within 30 days. This, too, is frequently specified in the ad.

Sometimes the ad will also specify the bidding system. The most common bidding ^ysteiu af f<irm auctions around here is the number system. The bidder registers his name and address with a clerk on the site. The clerk will then give the bidder a number on a card. Sales are recorded by the numbers of the successful bidders. It's a good idea to record your purchases on your card as you bid, so that you can compare your record with the clerk's when you pay.

With these preliminaries in mind, let's move on to the six rules of buying at auction. I'll illustrate the rules with the story of the chain saw I bought for $9.

Rale number one: know your needs, i needed a chain saw. My teu-:cre plate has a ihrce-acre woodlot, and another 3,0u0 acres of hardwood forest surround me. My three wood burning stoves supply a large portion oi the winter heat. 1 needed a chain saw but didn't have 3250 to put into a good-sized new saw, and I wanted more capacity and ruggedness than a $100 ininisaw could provide. The point to the rule is to avoid impulse buying at auctions, right from the start. Generally, impulse buyers end up paying more for less. At auctions, an unwary buyer can end up getting far less for far more than anywhere else 1 know. So, start right by disciplining yourself to know what you need when you read the auction ads.

Second: know the merchandise. This doesn't mean you have to become a manufacturer's representative for Homelite if you want to buy a chain saw. It means you should make some effort to discover the basics of the product. It is enormously helpful to know new models from old ones, good models from bad ones, and safe ones from dangerous ones. So I did some research. By talking to some folks who use chain saws every day, including a man who makes his living felling trees, I learned some valuable product information. 1 was ready to make intelligent decisions about brands, models, features, and the like. I knew the merchandise.

The third rule is related to knowing the merchandise: know the market. Find out how much the new product sells for and how it depreciates. This also requires a little research. I talked to the dealers, read classified ads, and generally shopped around. I discovered that I could expect to pay a retailer about §90 for a five-year-old saw in good working order. Now I was prepared to make a realistic auction bid.

Know your merchandise— original cost, present retail price, depreciation. Will it satisfy all your needs? If you're planning to buy a tractor, be sure to get there before the bidding begins, to start it up, look for oil leaks, and kick, the tires.

The first tiiree rules involve processes that occur before you get t-j the auction to bid. The last three involve decisions yoti must make at the auction. Once you have identified your needs, done some product research, and analyzed the market, go to the auction and inspect the merchandise. That means getting to the auction early. I read an ad in the local paper that listed a "Poland" chain saw among the items for sale. I was interested and showed up before the bidding began. The saw turned out to be a late model Poulan with a 20-inch blade. It was in good condition. I looked at it carefully, started it, and checked to make sure the blade was straight. I took the spark plug out and looked at the deposits on the electrodes. Remember rule four and inspect the merchandise.

Everything about the Poulan was fine, except the bidding. There were oth ers interested in the saw. The bidding started at §50, I got in a bid at $60, and the price was up at flOO before I could nod again. I was tempted, but I stayed out after it passed my limit of §95. That is rule five: set a limit.

Tne limit is important because there is a psychology of auctions. The auctioneer, an agent for the seller, is trying to get the highest price he can for an item. He usually has a sound knowledge of what an item is worth. He tries to get the bidders to compete for the sate of competition and to lose sight of the intrinsic value of the item. The auctioneer hopes to make the chain saw a symbol of victory in the contest, rather than a tool for cutting wood.

Those old situation comedy scenes are accurate. People do get so involved in the bidding that they forget the worth of the merchandise. I saw it happen recently. I had gone to a farm auction to bid on some rolls of American wire. The wire was selling in the Sears catalog for $35 a roll. 1 had the page from the catalog with me. The auctioneer tried to open the bidding at S50 a roli, came down to an opening bid of $20, and when 1 left, the price was up to $40 a roll and still moving. You have tc set a limit and stick to it. Otherwise, you are going to pay double—once for the merchandise and once for the fun of bidding.

Those five rules—know your needs, know the merchandise, know the market, inspect the merchandise, and set a limit—are adequate for most auction situations. The likelihood of disaster is minimal if you follow them. However, the chance of getting a fantastic bargain is also less than it might be. The final ride will permit you to seize a situation and make a score. It's simple: be flexible.

Don't abandon the first five rules. That's why I put them first. If you follow the first five, you will be adequately prepared to be flexible. It is the person who has learned flexibility without discipline who gets into trouble.

The conclusion to my chain saw story illustrates the importance of flexibility. While looking at the Poulan, I noticed an elderly David Bradley saw for sale. It had a 19-inch blade and didn't run. I looked closer. I'm not much of a mechanic, but I discovered part of the problem. There was no fuel line running from the tank to the carburetor. But there was oily sawdust around the blade and chain, and there was no rust anywhere on the saw. It was obvious that the saw had been running recently. The saw was heavy but well balanced and offered secure grips in all attitudes. I decided to bid up to $25 for it.

A piece of rubber gas line, a set of points, and some minor carburetor repairs, and the saw was running. It has been running ever since.

I got the saw because I was flexible and ready to run a risk. But it was a prudent risk, because I followed the rules of buying at an auction. The risk was calculated, based on a pretty good idea of what I was getting.